Have you ever noticed bubbles forming in your sink after pouring a bit of hydrogen peroxide down the drain?

Hydrogen peroxide is a compound made of hydrogen and oxygen. In the human body, when reacted with an enzyme, called catalase, H₂O₂ forms bubbles of oxygen gas. Hydrogen peroxide can also form bubbles when added to your kitchen sink. However, this mostly happens in the presence of tissue catalase. 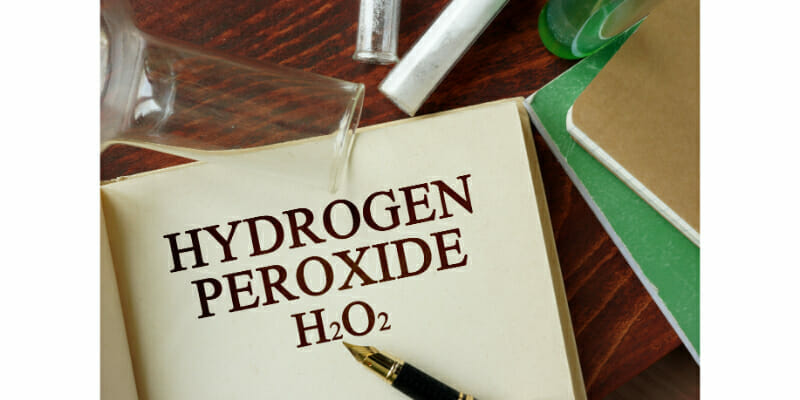 Is it good to pour hydrogen peroxide down your drain?

To find out the answer to this question, you need to first understand the chemical and physical behavior of hydrogen peroxide.

As previously mentioned, hydrogen peroxide is a compound formed by the reaction of hydrogen and oxygen. It has two hydrogen atoms and two oxygen atoms, which is while its chemical formula is written as H₂O₂.

Physically, hydrogen peroxide is a colorless liquid dissolved in water. When in gaseous form, it can always irritate the eyes and mucous membranes. That’s not all; the solution works as an oxidizer, meaning that you can always use it as a disinfectant to eliminate germs and bacteria.

Furthermore, hydrogen peroxide is usually very stable at room temperature; this is why you’ll find it foaming on your skin (without cut) or inside the bottle.

That’s not all; the aqueous solution is sensitive to light, which is why it’s always advisable to keep away from sunlight. That’s also why you will find hydrogen peroxide available in brown bottles.

Now, let’s go back to the burning question above; is it good to pour hydrogen peroxide down your kitchen drain?

The answer to the question is yes; H₂O₂ can act as a disinfectant to remove germs and bacteria from your sink. Besides, the aqueous solution will also help you unclog your kitchen drain and eat up the catalytic matters.

In case you’re wondering whether or not hydrogen peroxide will damage your drain, you might have to stop worrying about it. When compared to other chemical substances under your kitchen sink, hydrogen peroxide is less toxic.

As earlier mentioned, hydrogen peroxide is usually less toxic for your kitchen zinc. However, you need to understand that this is only true when the concentration of the solution is pretty low – usually at 1% to 3%.

Food-grade hydrogen peroxide usually has a concentration of about 35 percent, which is pretty much dangerous for your zinc. If this is what you have in your home, you shouldn’t pour it directly into your drain, as it’s caustic and hazardous.

Instead, you need to first bring down the concentration by diluting the substance with water.

You need to also understand that diluting the food-grade hydrogen peroxide isn’t enough to keep the solution safe for your drain. For the safest results, you need to add sodium sulfite or other substances into the mix.

With this process, you can always take advantage of the food-grade hydrogen peroxide in your home to unclog and disinfect your drain.

Another type of hydrogen peroxide that is dangerous for your kitchen drain is the industrial-strength type, which is usually about 90% in concentration. This substance is very toxic and could cause a lot of damage to the sink.

The substance is useful in several industries, such as the paper industry, clothing industry to bleach fabrics, and textile firms. 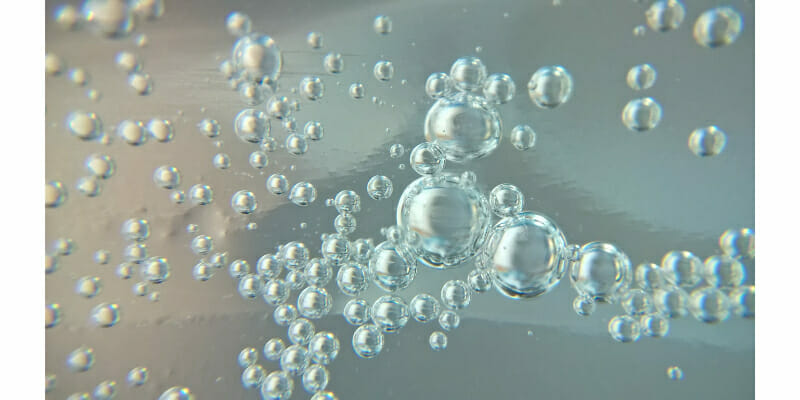 What does it mean when hydrogen peroxide bubbles?

Here’s another burning question; what exactly does it mean when hydrogen peroxide bubbles?

The simple and direct answer to the question is that the foaming effect means that the hydrogen peroxide has been broken down into water and oxygen gas.

The oxygen gas is the bubble you’re seeing when you add the aqueous solution to things, such as wounds and the kitchen drain in your home.

In the human skin, hydrogen peroxide can be used to clean and disinfect wounds. When added to the cuts on your skin, you will always notice bubbles coming from the wound.

The reaction of hydrogen peroxide causes this foaming effect with an enzyme inside the skin, called catalase.

In case you don’t know, catalase is an enzyme that is pretty much common in almost all living organisms, especially those exposed to oxygen. Some of these organisms include bacteria, plants, and animals.

When catalase comes in contact with hydrogen peroxide, the enzyme will allow the substance (H₂O₂) to be broken down into water (H₂O) and oxygen gas (O₂).

Since enzymes aren’t always used up during chemical reactions, the catalase will recycle and be utilized again to initiate more reactions. The primary function of catalase is to protect organisms from free radicals.

In the food industry, catalase is also of great benefit. It helps to prevent certain substances from contaminating the food. That’s not all; catalase can also be used as a disinfectant for contact lenses as well as a cleansing agent for several different products.

Bottom line: if after adding hydrogen peroxide to any substance, you notice a bubble, what that means is that H₂O₂ has been broken down by catalyst (the enzyme) into water (H₂O) and oxygen gas (O₂).

The bubbles you’re seeing come as a result of the release of the oxygen gas from the catalytic reaction.

Is it bad if hydrogen peroxide bubbles?

Here’s another frequently asked question; is it bad if hydrogen peroxide bubbles after adding to your drain or cut?

The simple answer to the question is no; the bubbling effect isn’t dangerous for you. Instead, it is very satisfying to see.

What is dangerous is having hydrogen peroxide inside your body? And since the body knows this, it continuously produces an enzyme that is capable of breaking down and destroy the harmful hydrogen peroxide.

As earlier mentioned, the evolution of oxygen gas during the catalytic destruction of hydrogen peroxide by the catalase or the produced enzyme is what brings about the bubbles.

That said, once you start noticing the bubbling effect on wounds, it means that the hydrogen peroxide has been rendered harmless by peroxidase or catalase.

Furthermore, the bubbling effect that you notice after pouring hydrogen peroxide inside your drain means that tissue catalase is present in the sink.