You can bury galvanized water pipe, but it is not guaranteed that it will not corrode. Although it is known to be durable and can last for decades, soil condition, temperature, and the type of water it is exposed to can contribute to shortening its lifespan. 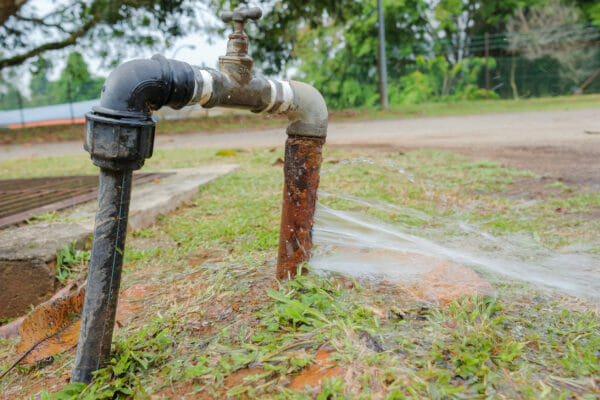 Will a galvanized pipe rust in water?

In a nutshell, a galvanized pipe may or may not rust in water as it depends on the type of water where it is submerged or exposed.

It also depends on other several factors such as pH level, oxygen content, and temperature. In this post, we will focus on how the type of water and temperature can make the galvanized pipe rust.

There are three types of water where a galvanized pipe can be exposed – pure water, natural freshwater, and seawater.

Pure water is known as distilled water and de-ionized water while rivers, lakes, canal waters are considered as freshwater.

On the other hand, seawater is also called saltwater, which comes from the sea. The components for each type can either corrode the pipe easily or inhibit the corrosion.

Pure water is corrosive to the galvanized pipe zinc coating.

Due to the increased aeration, a pipe exposed to pure water makes a pipe corrode fast. This is the reason why you must not expose the pipe to pure water because it is corrosive to the zinc coating.

Natural freshwater can either contribute or not to the rusting of the pipe based on the oxygen saturation of the water and the hardness of the water. Freshwater with saturated oxygen can rust faster than less saturated water.

This is evident on pipes partially immersed in freshwater. Because the surface of the water has more oxygen than the underwater, the pipe exposed to the oxygen has a high corrosion rate.

That is why a fully immersed pipe is better because there is less oxygen underwater, which means a lower corrosion rate.

When it comes to water hardness, the harder the water, the lesser its corrosiveness. Water hardness is based on the calcium carbonate present in water.

Very hard water has over 220 ppm of calcium carbonate while soft water contains 10-50 ppm calcium carbonate. When the carbonate combines with zinc present in the pipe, it creates a passive film that slows down the corrosion.

So if the water is hard, it means that the carbonate coating is thicker compared to the soft water making it less corrosive than soft water.

Seawater has a high level of chloride concentration. When the chloride ion present in the seawater reacts with the ferrous metal such as galvanized pipe, it produces ferrous chloride.

The product of the reaction may react with the oxygen present in the water. Then it produces Iron (III) oxide, which is also known as rust.

Going back to the question, “Will a galvanized pipe rust in water?” Yes, it rusts in saltwater.

The next thing that we need to analyze is the effect of temperature on the formation of rust. In general, whichever type of water where the pipe is exposed, hot or warm water can speed up the reaction between zinc and oxygen.

It means that the warmer the water, the rust forms faster than in cold water. This is noticeable between the tropical seawater and temperate seawater.

Because temperate seawater has a freeze cycle, it is less corrosive than tropical seawater. 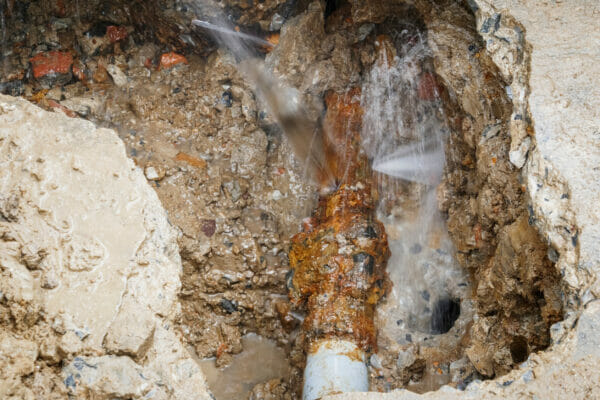 Can you bury galvanized water pipe?

The process is called hot-dip galvanizing. In this process, the steel pipe is coated with the molten zinc to reduce the exposure to oxidizing agents that lead to the metal’s corrosion.

But even with the zinc coating, the steel pipe can corrode when it is contacted with soil and the soil-water electrolyte. Understanding the soil component can give you a clear picture of the corrosion process.

Soil has three phases such as the solid phase, aqueous phase, and gaseous phase. The solid phase has three classifications such as the silts, sands, and clays. Among the three types, clays have a higher water absorption rate than silts and sands. Because the clays absorb water fast it has a high corrosion risk.

When it comes to the aqueous phase, the soil is categorized into three types such as free groundwater, gravitational and capillary. The free groundwater does not contribute to corrosion because most of the buried pipes are located above the water table.

The water sources may come from irrigation and heavy rainfall. When the soil is soaked with water-soluble salts may leach from the soil. When the salt leaches, it can corrode the pipes.

The capillary water or capillary condensation is more corrosive than the gravitational water because it results in moisture accumulation into the pores of the metal. This condition makes the corrosion rate high.

The third phase, the gaseous phase, has dry soil but with a high level of oxygen on the soil’s sub-surface. Due to the amount of oxygen, the steel corrosion is high.

Should a galvanized pipe be replaced?

Galvanized pipes under a controlled environment can last for decades. However, this is not possible most of the time.

Many environmental factors contribute to the corrosion of a galvanized pipe. If there is one obvious reason to replace it, it is because the pipe is corroded.

But corrosion is not the only reason why you need to replace a galvanized pipe. One of the reasons is when you find out that the pipe is releasing poor quality water. At this point, the water smells and tastes bad. Probably, the pipe has acquired large quantities of mineral deposits that are not good for your health.

The presence of leaks on the pipes is another reason you need to replace them. There are temporary fixes for leak pipes but they do not last for a long period.

In this case, it is more favorable to replace pipes. If you leave in an area where the temperature drops below the freezing point, it is practical to consider replacing a galvanized pipe with a PEX pipe.

The PEX pipe can withstand extreme weather conditions and it can last for years as well.

You can notice low water pressure on the showerhead and faucet aerators. You may think that it can be caused by calcium deposits but it can be due to rust build-up.

Rust build-up is easy to spot. In most cases, you can notice water discoloration and stains on your porcelain fixtures.

When you see these signs, it is a signal that rust is starting to build up in the pipe or it may have consumed the entire pipe. For this reason, it is time to replace a pipe.

Galvanized pipe is a good investment for big facilities that require a piping system. It is cheaper than copper and it is more durable than PEX pipe.

However, it may not be practical to use it under several conditions.

As mentioned, you must know the type of water where it will be exposed, the soil condition, and the temperature. Knowing all these factors can help you decide whether you will push through using a galvanized pipe.