One requires quick response sprinklers in areas that are light hazards. You can therefore use them in places such as large buildings, an office setting or in schools. Usually, this kind of sprinkler can discharge water far, and therefore you can use it in areas with high walls. 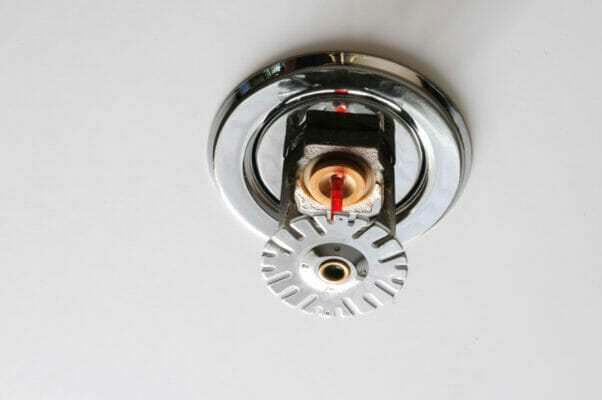 Where Are Standard Response Sprinklers Required?

One most essential piece of equipment that every building should have is a fire sprinkler. This tool should be able to discharge water in case of a fire outbreak automatically. Also, the sprinkler should come in handy when the temperature in a room exceeds the normal one.

The purpose of a standard response sprinkler is usually to control the severity of the fire. It does this by pre-wetting the materials or the area where the fire emanates, and by doing so, it will be able to do away with the fuel source that may make the fire spread.

Therefore, by cooling and wetting the fire source, the fire will not go to other parts of the building.

Also, once it eliminates the fuel, then the fire will automatically go out. Most times, you will find a standard response sprinkler in factories, warehouses and commercial buildings. There are usually few people in such places, so there is not much concern about controlling the damage that the fire will cause.

The standard response sprinkler focuses mainly on slowing down fire spread in such areas since the damage can be much.

Also, it focuses on containing the damage and, most importantly, buying time so that the fire department can get to the building and put out the fire. So, its concern will not be to put it out but rather control its spreading.

This sprinkler is individually activated; therefore, only the sprinkler directly above the fire will activate to cool it. Such makes the sprinkler very efficient; therefore, its heads work well for commercial and industrial buildings.

The sprinkler is vital in light hazard areas which may be already fitted with the standard response fire sprinklers.

Where Are Quick Response Sprinklers Required?

The quick response sprinklers are mainly used in light-hazard areas, including places like the office, buildings and schools. Like any other type of sprinkler, the immediate response sprinkler serves to ensure safety in the event of a fire.

All the sprinklers usually activate when there is a high temperature that makes the fluid in a bulb typically present in the sprinkler expands.

Once it grows, it will explode the bulb, making water rush out of the sprinkler to cool down the temperature. There is usually a 3mm bulb in the quick response sprinkler that responds quickly to rising temperature.

Usually, you will find the quick response sprinkler in areas or buildings where there are many people, and it is popular in places such as schools and healthcare facilities. In such areas, the first concern in case of a fire outbreak is ensuring that the people here are safe.

This sprinkler usually activates quickly in case of fire to ensure that people in there are safe. Even as they start fast, this sprinkler typically discharges water high up the ceiling. It, therefore, works well in a tall building. The primary purpose is to ensure that it cools down the roof and the surrounding walls around it, which are most likely to spread fire to other building parts.

Usually, cooling the ceiling helps prevent a flash-over, therefore, reducing the severity of the fire. It also helps in slowing down a fire so that it does not rise within a building.

To ensure that humans in a facility are safe, this kind of sprinkler will always come through to ensure the people there are safe and that the fire does not spread elsewhere.

From the design of quick response sprinklers, they are usually thermal sensitive. For this reason, they can function faster than the standard response sprinklers even when the fire situation they are dealing with is the same. Their ability to reduce the time of operation ensures extra safety, and also, people can be able to save more properties before they catch fire.

In light hazard areas, you may find combustible things, which contribute to the quick spreading of the fire. Some of these things include flammable liquids such as gasoline and paints, and there are also other ordinary combustible materials such as wood and paper.

In case of fire, such materials will most likely catch fire quickly. For instance, in school, the fire may spread since there are maybe many papers around hence the need to utilize the quick response sprinkler.

It will ensure it tames fire fast before it moves to other areas, which may cause havoc.

It is now common to find sprinklers in residential areas since you cannot exempt them from fire accidents.

However, the different types available are installed in other areas depending on the kind of damage that the place can experience. Such applies to even the sort of sprinklers that are present in residences.

Usually, some residential sprinklers are quick response, and you can also find other homes with the standard ones. But there are specific sprinklers that are specifically developed to serve residential areas. The design of such sprinklers is such that it will enhance survivability in case of fire.

Residential sprinklers feature a certain pattern that suits residential hazards. In residences, fire may mainly affect areas within the walls, such as the bookshelves, cabinets, furniture and curtains, which in most cases are placed along the border.

Therefore, you will need something that will throw the water along the edges of the room and the ceilings so residential sprinklers can do this.

Usually, residential sprinkler heads are fast response types, at least for most households. Such a sprinkler helps fight the fire at its early stages to prevent it from spreading. It, therefore, needs to act quickly, which makes it a type of a fast response sprinkler.

So, this kind of sprinkler usually functions almost the same way as the quick response sprinkler. It does this by activating quickly in case of fire and throwing water far and high up the building.

Also, like the quick response sprinkler, this main sprinkler focus is to ensure the safety of people and property in case of a fire outbreak.

While these two sprinklers are almost similar, their functions are entirely different. They are both fast response sprinklers, but the quick response one is mainly used for commercial purposes while the residential sprinkler is primarily for residential purposes.

It may be pretty hard to use the quick response one in a residential area, and it may not be as effective as it should be.

Usually, the residential sprinklers are always great in fighting a residential fire, and they thus come with a hydraulic kickback which assists in the hydraulic calculations of an area. Also, since they are not a quick response, they cannot make the remote area reduction.

Therefore, the best type of sprinkler to have at home or in a residential area is a fast response residential sprinkler. It serves to put out fire along the walls and prevent it from spreading to other parts of the house. Different response sprinklers seek to serve other functions, and it may be hard to use one in an area which it cannot fit.

Quick response sprinklers are a good fit for schools and commercial buildings due to their ability to quickly respond to high temperatures and throw water to long distances.

For the standard sprinklers, their main aim is to avoid further spreading of fire, so they are the best suit for areas with few people.