Having a shower with a rain-like water pressure is an amazing feeling. The feeling of the water pounding down on your back and the steam filling up the bathroom makes you feel like you’re at a spa.

But it can be hard to get that perfect, satisfying shower if your shower head isn’t properly installed. So how far should they be from the wall?

Rain shower heads should be around a 80 inches far from the floor so the average person can freely move when taking a shower; however, the distance between the wall and the showerhead can change according to the model and other relevant factors, such as a person’s size. 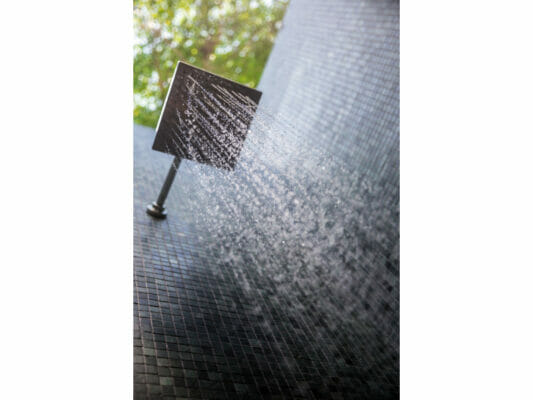 Where Should A Rain Shower Head Be Placed?

Everyone loves a relaxing and cozy shower after a long day, but not all head showers can offer that calming sensation; yet, only rain head showers can give a comfy experience when showering.

Thus, rain showers are an amazing stress relief method. A hot rain shower increases the circulation over the body and even helps with respiratory illness. All this, in combination, relaxes the body muscles making them relieve stress.

And for those who love cold showers, a chilly rain shower can activate the body and help to calm irritated skin. Hot or cold, a shower rain will offer a relief sensation over the body.

A rain shower can be used for therapeutic purposes since it brings many benefits. To achieve a therapeutic shower, these have to cover the body extension in a consistent waterfall.

Not too hot, not too cold, a refreshing rain shower will leave a refreshing effect on the body. But it is not about simply placing the rain shower head; it actually has a specific distance where this is placed to enhance the showering experience and make the shower look good.

The person is taking a shower needs space to move freely all over the shower cabin. This includes when the person moves its arms up and down and doesn’t hit the showerhead. Thus, to offer that therapeutic effect the showerhead should have a specific measure. To accomplish all this, the showerhead has to:

If these parameters have been accomplished, people can fully enjoy a relaxing shower. However, people have different opinions about rain showerheads, and some argue that rain shower heads can be annoying.

When others consider that waterfall an advantage, some people think it is exasperating having the water falling directly from above covering all the body.

Rain shower heads have several features that can be gainful, but not everybody has the same opinion. So, let’s analyze them objectively, and lets people decide by themselves if rain shower head fill their needs and likes.

The main characteristic of a rain shower head is how this emulates rainfall so the water will fall directly from above. Thus, these showerheads come in different designs, and some of them have adaptable models so the person can easily control the water flow and waterfall.

The showerhead arm is 90 degrees, so the water can fall straight over the person; however, some showerheads have an adaptable base that moves to create angles on the waterfall, but the person can still enjoy the rainfall experience.

The rain shower heads commonly have a wide shape that can cover the body totally; though, there are smaller models on the market.

As I mentioned above, rain shower heads have different designs and models, so these can easily adapt to the person’s likes. Thus, they will add a sophisticated look to the bathroom.

Rainshower heads are a bit more expensive than other showerheads; however, the maintenance and cleaning of these are easier than the rest.

Therefore, some models have a water-save mode, and considering the maintenance and the water-save feature; rain shower heads can help to save some money in the future.

How Far Should A Rain Shower Head Be From The Wall?

Installing a rain shower head is not a hard task; however, it is recommendable that a plumber does all the hard work, and install the showerhead.

Thus, a bathroom should be a personalized space, so the room design has to fit with the likes and needs of the owner. This also includes the measures of the shower cabin.

The person should be able to move freely when it is taking a shower. As mentioned above, the showerhead should be a 80 inches from the floor which fits the average height of a person; however, the measure can change accordingly to the person’s height and size.

The showerhead must be far enough from the floor so the person can move its arms freely without hitting the wall or another item on the shower.

Thus, when the plumber is installing the shower arm, it should consider the showerhead model to determine the length of the shower arm to place the shower head far enough from the wall.

Round or Square Shapes. Though some rain shower heads may have some ostentatious designs, they commonly have two shapes: round or square. However, aspects like the coverage depend on the showerhead width and are not affected by its shape.

From Ceiling. Another common design is those rain shower heads that are installed on the ceiling. Here, any shower arm is involved so the plumber has to measure perfectly the distance between the showerhead and the wall. 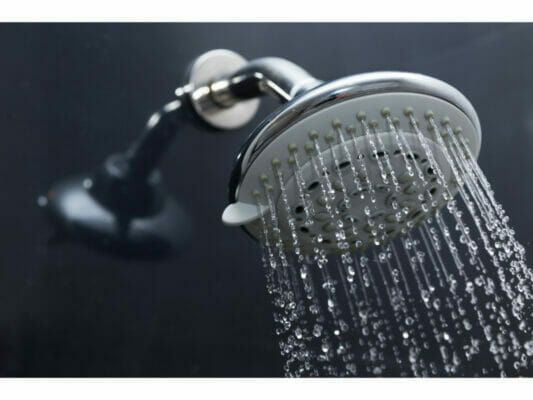 How Far Should A Regular Shower Head Be From The Wall?

For regular showerheads, the shower arm is around 100 – 120° degrees, so the waterfall has a small curve.

Then, the angle of the arm for rain shower heads is a perfect 90° degree, so the waterfall goes straight to the body from above. Another notable difference is the width; regular showerheads don’t have a big extension since the water falls over the body diagonally.

Thus, regular showerheads come along with the arm, so the distance doesn’t need to be measure. However, it is essential to consider the shower space and the comfortability when someone is taking a shower.

Even when regular showerheads are smaller than rain ones and don’t have therapeutic features, some people still preferring them over the rain shower head.

Then, let’s analyze objectively the features and details of regular showerheads, so people can create a critical opinion about and decide which suits better for their bathroom.

Waterfall. Above, the first feature I analyzed about rain shower heads was the waterfall, so let’s talk about this initially. The shower arm of regular showerheads has a small inclination, so the waterfalls over the body diagonally.

Coverage. Regular showerheads have a small coverage, and water only falls over specific body parts, so the person has to move around to cover their whole body with water.

Design. Regular showerheads haves more design than rain shower heads; actually, there are so many models and designs that regular shower heads can be divided into different types.

Cost. These are less expensive than rain showerheads. However, the price can vary according to the models and brands. There are some expensive and sophisticated models on the market.

Regular or rain shower heads, there is nothing more relaxing than taking a good shower after a long day, so the person only thinks about what suits their needs and likes better to select between the different types of showerheads.