First, check underneath the handle cover. That’s where most of the valves are placed. Use a screwdriver to uncover the lip, and you will find the valve directly under it. Typically, the valve should have two nubs below it and a collar as well. Adjust the nubs clockwise, and that will be it. 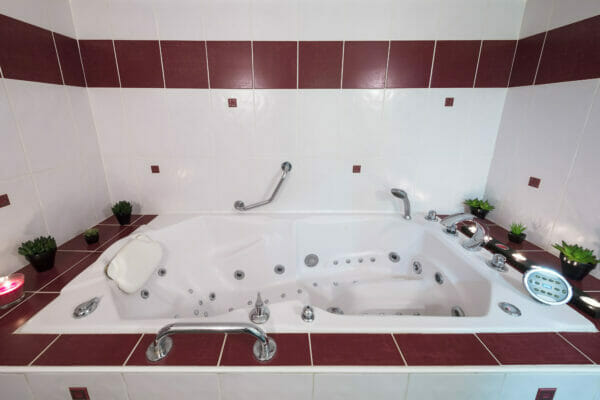 The nub you should adjust should be the one positioned at ‘twelve o’clock.’ By adjusting it in a clockwise direction, you will have adjusted the temperature changes caused by the Jacuzzi valve.

Accidental temperatures changes in the Jacuzzi can cause your water bath to heat excess and burn your skin. With the adjustments, however, you can effectively control the water heater and enjoy your bath peacefully.

Adjusting the Jacuzzi valve will set a maximum point where the heat cannot go beyond. So in case of accidental touch on the valve when you are showering, the valve will not heat to the water to very high temperatures that might damage your skin.

Since for water to be kept hot requires a lot of power, the adjustment of the Jacuzzi shower valve plays a significant role in cutting your home’s energy consumption. It sets the maximum point where the handle can reach.

The handle’s rotation angle and, thus, the maximum water heat will depend on how far you set the nubs. You will need to play with the nerves to get the proper temperatures for your water bath in the Jacuzzi.

A minimally rotating angle will heat the water more gently; this will not only ensure your water heat up excess but also save on your home power consumption. With that said, let us look at what a Jacuzzi shower valve is and how exactly it operates. Read on.

What is a Jacuzzi Valve?

To better understand what a Jacuzzi valve is, we need first to define what a valve is. A valve is a device used to control fluid passage.

It allows for the input or output of fluid in one specific direction. It also automatically controls the amount of liquid passing through it at a given time to ensure a balance as it was set. A valve, therefore, is automatic equipment that allows specific amounts of fluid to pass through it in a given direction.

When a considerable amount of water is allowed to flow at a given time via the valve, the resulting water temperatures will be small. This is because high amounts of water will overpower the heating system in the Jacuzzi, and thus less and heat will be channeled into the water.

The shower’s control valve determines the temperature adjustment on a shower faucet. In contemporary construction, the most typical control valve is a balancing valve, often known as a mechanical valve or an anti-scald, and they maintain uniform pressure and temperature.

These valves make use of pistons and diaphragms to ensure there is a balanced mix of both hot and cold water.

The valve plays a primary role in controlling the force of water in the Jacuzzi. Thus essentially, it controls the heat of the water. Though the heater heats the water, the vales determine the actual water temperature.

The Jacuzzi has its intake valves located at the base to allow water to enter the Jacuzzi smoothly. It is protected with fine mesh to filter the water off any particles or debris that might have been in the water.

Although the inlet valve is ordinarily effective at removing foreign particles and trash, the valves can sometimes become stuck. Water from your Jacuzzi may spill out and ruin your home if the air intake valves become clogged.

To avoid this circumstance, you must clean the intake valves often. When the particles accumulate in the Jacuzzi, you will have to wash it off to ensure it doesn’t end up blocking. Washing the intake valve is a necessary procedure in keeping your Jacuzzi at its best functionality. The steps of cleaning the Jacuzzi include: 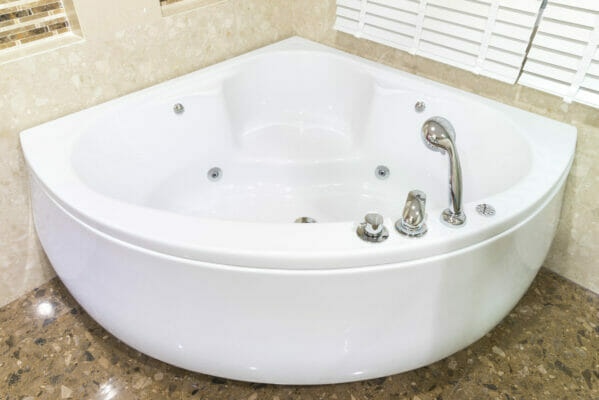 How Do You Adjust The Jacuzzi Shower Valve?

Because keeping hot water demands a lot of power, adjusting the Jacuzzi shower valve plays a significant part in lowering your home’s energy use.

It specifies the farthest place the handle can reach. The angle of rotation of the handle, and maximum water heat, will be determined by how far the nubs are placed.

To acquire the perfect temperatures for your Jacuzzi water bath, you’ll have to play with the nubs. A minimally spinning angle will gently heat the water, ensuring that your water does not overheat and save you money on your home power use.

By adjusting the Jacuzzi valve, you can establish a maximum temperature that the heat cannot exceed. As a result, if you accidentally touch the valve while bathing, the water may be heated to extremely high temperatures, which could harm your skin.

Examine beneath the handle cover, as there is where the majority of the valves are generally found. With a screwdriver, remove the lip, and the valve will be right beneath it. Typically, the valve will have two nubs beneath it as well as a collar. That’s the only thing there is to it. You’ll be done when you turn the nubs clockwise.

The nub at “twelve o’clock” is the one that has to be tweaked. By turning the Jacuzzi valve clockwise, you will have adjusted the temperature differences generated by it.

Unintentional temperature changes in the Jacuzzi can overheat your water bath. However, with the changes, you will appropriately adjust the water temperature and enjoy your bath.

Many shower valves don’t have a big difference, and their functionality is almost the same. The only difference is that a Jacuzzi shower valve allows water in the Jacuzzi.

Since the water in a Jacuzzi is always a lot, the Jacuzzi shower valves allow relatively more water than other regular shower valves.

The standard shower valves, especially those for the overhead showers, are small to allow only for a small amount of water to pass through at a time. This ensures that the water is heated enough and saves water since it will continuously run off the drainage. On the other hand, the Jacuzzi shower has a larger valve that allows a lot of water to pass through.

Valves are an essential part of a Jacuzzi; they control the amount of water in the Jacuzzi. They help in regulating how water will also be heated.

You can adjust the valve of the Jacuzzi to regulate the amount of water that enters the Jacuzzi, thus the temperature of the water. Washing the valve can also play a significant role in keeping the fine mesh clean and preventing the risks of debris blocking it.

Having a Jacuzzi in your home is an added luxury, therefore ensure you keep it running efficiently at all times