You may have experienced this dreadful experience before - you are enjoying a nice, hot shower when suddenly the water pressure drops, the water instantly becomes ice-cold, and you're forced to either make do or wait until everything returns to normal.

It's a dreadful experience, and more often than not, it's caused by someone flushing the nearby toilet while you were just minding your own business. It's universally known that toilet flushing causes this kind of effect, but the reason behind it is not nearly as well-known.

Why does flushing the toilet affect the shower? Today, we'll be looking into that question and finding out what causes the pressure to drop, what causes the temperature to change to an extreme, and what you can do about it.

What Causes the Pressure To Drop?

The entire water network throughout your home relies on adequate water pressure to work. Most plumbing is done in a "trunk and branch" system. This system works because water is pumped to run from one side of the building to the other through one large pipe. Smaller offshoot pipes then run off this main pipeline to the various outlets throughout the building, such as the faucets, the water heater, the washing machine, and of course, the shower and toilet.

When you have low pressure in your home, one of these outlets needs to source the trunk pipe's water. This will mean there is inevitably less water for the other plumbing fixtures to source from.

Some buildings are set up so that there is only one off-shooting pipe that sources water to the shower, bath, faucets, and toilet. While this is very poor practice and is quite illegal in many parts of the world, it is an unfortunate fact that some buildings have this setup.

When you flush the toilet, the toilet's cistern needs to refill via one of these offshoot pipes. Thus, it then robs priority from the other outlets on the same line or nearby enough to cause an issue. While a toilet's cistern refills, less water makes its way to the shower, so the pressure in the shower drops.

What Causes the Temperature To Change?

Similarly, when your plumbing is set up in a trunk and branch system, it often isn't just the water's pressure that drops. The miserable situation is often accompanied by a sudden temperature change, often to the hot or cold extremes.

This occurs for a similar reason, too. When the toilet is flushed, and the water priority is taken from the shower, all the water going to the shower instead goes to the toilet. This means that, based on your configuration, the bathroom will receive all the hot or all the cold water, leaving you in the shower to either shiver while freezing or quickly jump out the way of the scalding water.

It's not just the toilet that can cause this sudden change in temperature or pressure, though. Any other appliance or water fixture, such as a sprinkler system, washing machine, or dishwasher, will have the same effect. It still requires water to be taken from the main supply, taking priority over the shower.

Ways You Can Get Around This Issue

For some, having this change in water pressure and temperature is a minor inconvenience that you can forget about soon after you dry yourself off. For some, it can be a real pain, especially when you are used to a nice, warm shower that massages away tension with tremendous pressure.

Luckily, there are ways you can get around this issue. One of the easiest ways is by reducing how quickly your toilet refills. By simply slightly closing the supply valve or putting something like a brick or rock inside the cistern, you can slow down the cistern's refilling process, which means it has less of a drain on the main supply. This isn't exactly a way to prevent it, but it does help lessen the effects you would feel in the shower when the toilet is flushed. However, you should be aware that this will also reduce the toilet's water pressure, meaning that flushes are less effective, and blockages may become more frequent.

Other methods are more complex. They generally require a professional's help to sort out, as you could cause some severe and lasting harm if you aren't careful.

You could have a new valve installed in the shower. A mixing valve is perfect for minimizing temperature fluctuations caused by things like the toilet flushing. A thermostatic mixing valve essentially balances the amount of hot and cold water being mixed so that you can keep a comfortable temperature going, thanks to it automatically adjusting to meet your prerequisite needs.

You can also hire a plumber to increase the amount of water available. This can help alleviate the issue, but again, it is no permanent fix. By expanding the main pipe's size, you'll be increasing the amount of water that goes through, so you feel the effects of the dropped pressure a lot less. There will still likely be a noticeable temperature change, though.

Our last method involves distributing the water evenly. A manifold with home-runs requires a plumber, as this requires almost all the plumbing in the house to be changed. This system varies from the trunk and branch system, where it instead has a central load-balancing manifold. A dedicated pipe runs between the fixture and the manifold to distribute water evenly, and it is not shared among outlets.

Now we know what causes the toilet to affect our shower - a simple side effect of the way our plumbing was done in the past. Nowadays, modern buildings have different setups that prevent this kind of error, such as the central manifold. Hopefully, we've shed some light on a common problem and that you have some ideas on how you want to deal with it. 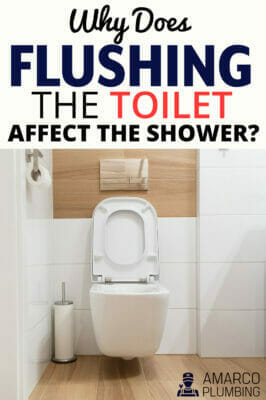